14 June – 15 July – FOOTBALL time! It doesn’t matter if you are into football or not…. you can’t avoid hearing, talking and of course watching (even with the corner of your eye) football these days. And what an amazing start for Russia, the host of the games – first match and first victory! 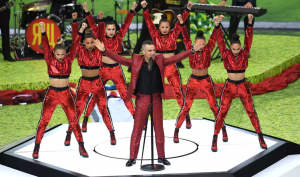 Thousands of football fans come to Russia from all over the world to the eleven Russian cities hosting this event. Boucle Design, an interior design company working internationally is taking this opportunity to have a quick look at the beautiful architecture from these eleven host cities for the FIFA World Cup: 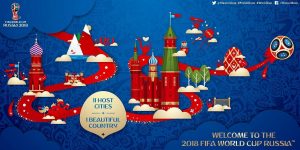 The stadium is designed with a capacity of 45,360 people. Spartak Stadium’s appearance is a matter of great pride. Its façade takes the form of chain mail consisting of hundreds of little diamonds representing the Spartak logo. The façade can be changed depending on which team is playing. For Spartak matches, the arena is bathed in red-and-white; when the national team is in town, it switches to the colours of the Russian flag: 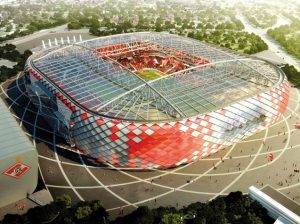 The tender to build Saint Petersburg Stadium was won by the renowned Japanese architect Kisho Kurosawa. It resembles the form of a spaceship with the roof held up by four masts. Capacity of the stadium has been reduced to 56,196 for regular league matches, but will be increased to around 68,000 for the World Cup. Technologically, Saint Petersburg Stadium is one of the world’s most modern arenas: 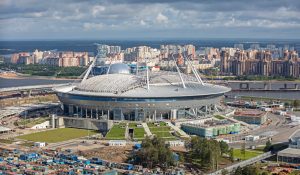 Kazan Arena was designed by the same firm of architects as Wembley Stadium and Emirates Stadium in London. It has a unique design, which blends seamlessly into Kazan’s urban landscape. Viewed from above, the arena, which stands on the banks of the Kazanka river, resembles a water-lily. Capacity 42,873:

Fisht Stadium was originally named after Mount Fisht, a peak in the Caucasus range of mountains. In the local language, Adygeyan, “fisht” means “white head”. The silhouette of the arena, which was designed by British architects, resembles a snow-capped mountain peak. Capacity 44,287: 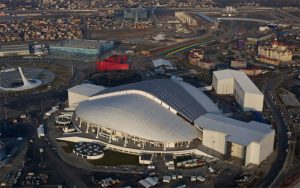 Rostov Arena’s original design blends harmoniously into the picturesque landscape. The shape of the arena’s roof imitates the meanderings of the Don River. The varying heights of the stands allow spectators to savour not only what is happening on the pitch, but also to enjoy views of Rostov-on-Don. From the left bank of the Don, the city looks particularly beautiful. Capacity 43,472:

The stadium has been designed in the shape of an oval. Its bright range of colours, combining orange, red and white, honours the distinctive colour palette of Mordovia’s arts and crafts. Capacity 41,685: 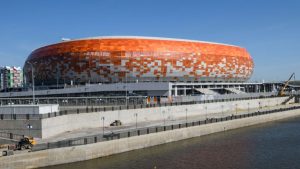 The stadium’s façade takes the form of an inverted, truncated cone with an open lattice structure, lending the entire building a monumental solidity. The design for the façade supports and the windbreaks embody aspects of a Victory Day firework display. The special way in which the stadium’s roof has been constructed, with cables reminiscent of the spokes of the wheel on a bicycle, lends the arena an extra element of airiness. Capacity 43,713: 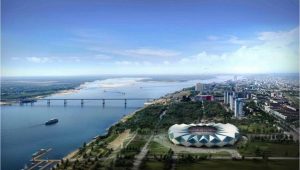 The westernmost of the 11 host cities, Kaliningrad is located in a slice of Russian territory on the Baltic Sea coast separated from the rest of the country. The all-new 45,000-seat arena is unofficially known as the Baltika stadium. After the 2018 World Cup, a new residential development will be built around the stadium, with parks, quays and embankments alongside the Pregola river. 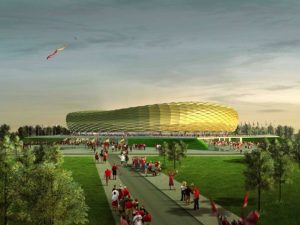 Home to one of the country’s oldest football clubs, FC Ural, the stadium was built in 1953. Since then, it has been refurbished on a number of occasions. The last of these refits has been made for the 2018 FIFA World Cup™. On each occasion, however, the stadium’s historical façade remained untouched, as an architectural legacy. Architectural and decorative features typical of Soviet neo-Classicism were used lavishly in the construction of the stands, along with decorative art in the form of sculptures, vases and banners. Capacity 33,061: 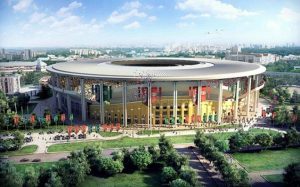 Nizhny Novgorod Stadium’s design is inspired by aspects of nature in the Volga region – water and wind. At the same time, given its location near the city’s most historic districts, the building must have a silhouette that is restrained and severe. Its light basic structure, made up of fine triangular supports arranged in a circle, supports a semi-transparent undulating façade that conceals the bowl of the stadium. The building is surrounded by a walkway connected by stairs inclined at a tangent, highlighting the flow of the stadium. By evening, the various façades will be lit up, highlighting their plasticity and airiness. Capacity 43,319:

When Russia won the right to host the World Cup in 2010, its bid presentation showed Samara’s stadium on an island in the Volga river. However, in 2012 new anti-flooding rules made the low-lying site too expensive and a new location near the city’s airport was chosen. The local authorities have set a cost limit of 15 billion rubles ($436 million) for the 45,000-seat stadium. Samara Arena’s design concept is dominated by the theme of space, as a tribute to the traditions of the region, and its renowned aerospace sector. A light, metallic hi-tech basic structure of weight-bearing supports will provide a cover over the stands, which will be 60 metres high. By evening, the whole structure will be lit up, emphasising the stadium’s expressive design:

Every day we see lots of creative designs in fashion, interior and architecture, all forms of art, even food ..…

Modern and minimalist doesn’t always mean boring, and The Mandrake Hotel proves it. In our opinion it’s truly…